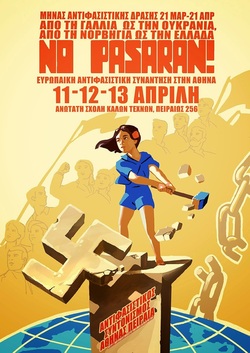 Participation at the workshop titled as "Restistance against sexism, homophobia and transphobia". Along with other five coordinators we raised awarness on the titled issues discussing personal experiences. There were two cases of teenagers asking help on how they can face such incidents in schools. This illustrates the need for critical pedagogy in schools. The workshop was supported by Queertrans and Loat

Personally, I would recommend the promotion of educational videos such as the following created by the Sweedish NGO RFSU which has been broadcasted at schools in Scandinavia.
﻿Sex på kartan﻿
August 2013, World congress of philosophy, 4social_stigma1

​Which is the relationship between the power of Academia and the power of Art?
The above question, along with other 12 questions, was addressed to 500 people who attended to the 23rd world congress of Philosophy in Athens.
It was an act that aimed to open a dialogue among the philosophers of 2013 and the Athenians. The questions were gathered through social media.
Attached file below (4social_stigma1).

Out of 500 questionnaires, I received none answer, even though it was an open call for people to answer on their own time though email.
One reason could be that most questions were written in Greek. On the other hand, there were three questions in English. Adding to that, at least 1/5 of the people who received the questionnaires were Greek. I addressed the questions exactly as I received them, in an effort to bring to the surface the various text-speaks Athenians use when they type on social media. The way they communicate.

Another explanation could be that, the philosophers of 2013 were not interested or they did not have time to answer to any of the questions.
My personal belief is that solutions and new ideas could and should be the result of experimental open dialogues within the society.
The project has the potential to continue in the next world congress of Philosophy, which takes place in Beijing, China in 2018.